note all of these images were foind on google many on salon sites that specialize in crochetting dreadlocks, (a few of the images were lost when the site was upgraded, sorry)

i apologize to the people in the photos for using them as examples, and do not wish to make it about the person, the persons choice to dread that way, the reasons behind those choices, or anything personal, just about the issues that arise from crocheting dreads

on to photo example 1 (from a salon)

harder to notice is the damage, the image looks slightly out of focus, and truthfully it is, but the out of focus-ness look of it is exagerated slightly by a halo of fruzzy fuzzy hairs all along the dread

i will say all dreads have that frizz..its normal and young dreads have alot more then mature dreads, however it appears that there are more protrudung hairs then there should be hairs in the dread! indicating most hairs have been broken multiple times (keep in mind not every broken hairs going to stick out either..many are inside unseen)

this brings up the unseen issue that photos cant show...scratchiness.. most crochetters have described the feel of thier dreads as scratchy..like brillo (steel wool) thats the broken ends sticking out all over much like a beards stubble as it just starts to grow in

pretty sure thats from marley studios?

ill break thus down the roots look interlocked ..thats ofcourse very bad for them too but ignoring that ..the stiffness is off the charts they look solid like wood not hair

this is the locticians dreads  (image lost)

crochet makes them super neat..for a short while but then all the hairs you broke pop out making them messier (to those that feel loose hairs are messy) then if no crochet was ever done.. the more often you crochet the more hairs get broke and the more often you have to crochet..often doing 15+ hours of 'maintenance" every week or 2 (very excessive although some do it all day every day and they dont last long)

and to the right we have the 1 day old dreads with interlocking pulling the roots too tight but even without the interlocking you can plainly see that each dread is thin but the section are large..3-4 dreads that size can fit the area

note tnr (twist and rup) or natural dreads do start off thinner then the section (and loose) then thicken as they dread, however crochet dreads start off too tight, tighter then the most mature dreads should ever be ..and stay that way remaining thin and stuff (and not dreading properly but i'll get to that later on) notice how on top they sorta stand out from her head not really hanging right, pictures further down will demonstrate that this condition can be seen year after year to some degree or other

they defy gravity, and when hanging year after year tend to get a either too straight look or a easy to spot curve inward around the face (presumably from trying to look at it while crocheting so its stuck in a curve)

now note the look, this isnt the best example since there is a lil hint of variation in size and shape etc, but crochet dreads tend to look too "perfect" so you may think is that a bad thing?

well it can be

take for example that bowl of fake wax fruit your grandmas had on the table for the last 30 years, it looks like 'perfect" fruit without blemishes never changing over time but no matter how much its made to look like real fruite it just never looks real and alive

by imposing too much control on them they loose that "dread factor" and look manufactured and fake and might as well be falls or a wig (note minimal crocheting only art the roots they can look more real, however the crochetted look can persist a long time ..over a year or more depending how often they were crochetted)

crochet hooks and the damage they cause  (image lost)

this is i think the dreadheadhq version with a latch thats supposed to make it do less damage, but to accommodate a latch the hook, the rod everything is many sizes bigger then recommended for dreads, and its not just the hook being pulled back through that causes broken hairs, its the whole thing being pushed in as well.

the initial crocheting of loose undreaded hair maybe the least damaging because untill its tight theres room between hairs, but that only applies if you stop before its even tight enough to feel firm

note the lil tuff of hair its grabbing theres probably hundreds of hairs in that 1 lil thing, in fact i have dreads that size that are 4 feet long (tiny bit thicker since they are 3 dreads combined)

i added arrows top 1 is hundreds of hairs in the hook next 1 down on left maybe single hairs but more like;y a few together the 1 on the rights a single hair

once a dreads tight theres not much room for a single hair to fit between 2 other hairs especialy inside the dread, add to that the chaotic natire and the hairs not all lined up theres no path through the dread without breaking hairs

add to that the fact that the tiniest hook mades 100 times thicker then a hair..well you do the math..theres no technique or even magic trick that can prevent broken hairs.

as a test in a silent room, i just broke hairs real close to my ear.. 1 hair.. silent 2 hairs if extremely close to my ear almost perceptible it wasnt till i broke 5 at a time that i could legitimately say i heard anything

i would imagine 1 of our medical professional dreadies could use a stethoscope and get a good idea of how many hairs break when crocheting.. but thats the kind of auditory sensitivity youd need in order to hear the damage being caused

sections way bigger then the dreads

oh also great example of 1 last point.. the texture of crochetted dreads is ..off (especialy up close) so crochets used often to maintain a uniform texture , otherwise the new growth will have a more normal texture and you can tell where the crochet was left off (for a long time till fully recovered) classic example of stiffness and how they just dont hang right..or act like hair 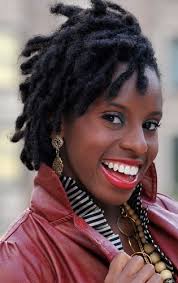 and to the right we have huge sections ..thick dreads but they would be 2-3 times thicker if healthy

if alowed to fully recover each dread would be huge

so think its time to discuss alternatives

mine i use this as an example way too often

this is an extremely gentle method that creates soft flexible healthy dreads (these are very young still in this picture and will neaten and tighten in a few months ..but they look amazing still)

they look and feel softer and hang like hair not sticks

however all the issies described are common to all except those dreads that were barely touched with the hooks..

the fact you crochetted..even once can almost always be spotted for a year or 2 or even more after

once you got that look your stuck with it for a long time and will most likely find the 1 that does look diferent..more natural will be your favoriite

@simplespiveys
7 years ago
58 posts
I didn't notice they use latchhooks until you pointed this out. That means the hairs can get stuck in the joint, too. Ouch!Great post S.E.! Really informative.

well most dont but that was dreadheadhq's solution thats suposed to make it damage less ..but being thicker id think it damages more

ever see the loose hair tool?

looks like a harpooon you could kill a whale with

Wow. This was a great help. Thanks Soaring Eagle.

Wow that really does look like a harpoon, lol. So glad I've never touched the hook.

Great post SoaringEagle,hopefully this will deter people from using this method.

if not at least educate them

you got to realize... if you cant get it loose enough with fingers to see light through it.. your not going to be able to shove anything through it without causing harm

I used a hook on my very first dread. Well, the dread is no longer with us. At a certain point the hairs all snapped and the dread completely fell apart. Luckily it was a very, very thin and small dread... but still. It was damaged beyond repair. After it fell apart I just let the poor hairs be and now after three years of neglect I have two, healthy, thicker dreads in it's place. Crochet hooks are devils.

I used a hook on my very first dread. Well, the dread is no longer with us. At a certain point the hairs all snapped and the dread completely fell apart. Luckily it was a very, very thin and small dread... but still. It was damaged beyond repair. After it fell apart I just let the poor hairs be and now after three years of neglect I have two, healthy, thicker dreads in it's place. Crochet hooks are devils.