want to get high? drug addiction gets gruesome with new drug krokodil

its being called a cheap but powerful heroin like drug..with devastating effects.

theres only been a few reported cases in U.S.A. so far but Europe is seeing a increase in it's availability on the streets despite the horrendous effects.

it is also now showing up in pills as well.

unsuspecting addicts are taking this powerful and dangerous drug without knowing it.

often the 1st signs of trouble don't appear untill its already been used a few times.

so whats so dangerous? isn't heroin bad enough how much worse can this be?

the high is more powerful then heroin supposedly, but thats not what causes the danger.

the danger is that it has a flesh eatting property that causes rapid deterioration of skin and muscle tissue.

these images are real..and really shocking..

i am posting this as awake up call to anyone who messes with powders..or even pills

your high is not worth it.. you will never know if this was added to what you have taken.

this could happen to you 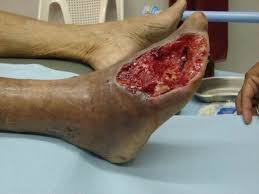 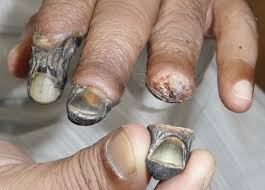 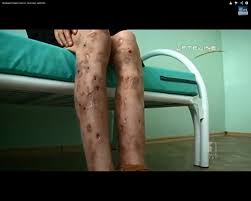 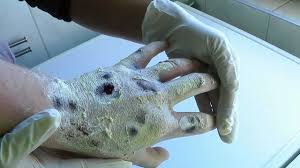 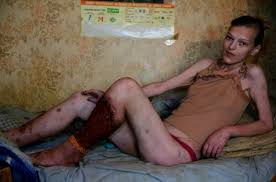 im sorry for this

but it has spread quickly despite strong efforts to keep it contained. 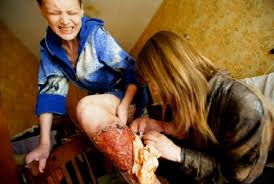 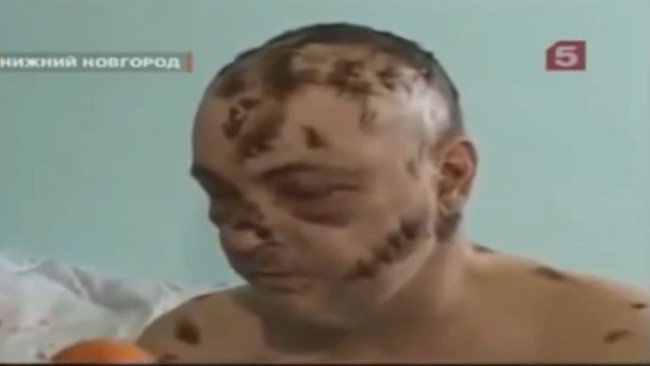 because it is easily synthesized from commonly available ingredients addicts have learned to make it themselves at home.

because of how quickly and easily it can be manufactured, and the short term high and quick withdraw users would make a batch and use it right away without further purification resulting in devastating gangrene often requiring amputation.

Of the few reported cases in U.S.A. several reported learning how to make it themselves online, but most thought they had bought legitimate heroin.


I believe we should make all drugs legal. Drugs will stop being "cool" for teenagers. Also strong drugs like these will stop getting recognition because schools will stop warning for them. I am sure more people will try krokodil because of this news.I started doing weed too because of group pressure. Nowadays I use it recreational and it makes me calm. Altough I will probably quit when I'm adult. I really want to start a vegan diet, and healty food go well together with a healthy lifestyle, so no drugs.

theres positives and negatives to drugs, opiates have bug negatives, bit for heavy pain might be needed (hopefully short term)

many drugs create a desperation to get more of those drugs, i knew a guy, actually was in the movie slackers, who later got addicted to crack, he had a huge coin collection, including an ancient 1 made to commemorate the birth of Mohamed he was supposed to sell all but that 1 to get his wife's car fixed so she could work, and pay everything he owed, ended up smoking it asll away including the Mohamed coin

another guy i knew, was a big travel agent, had millions, got adicted to xanax, in no time was homeless, and quit a whacko too

i knew a girl when i was maybe 18, was making about 16 grand selling extacy and doing about 6 grand every week

bout 1-2 years later went to see her .. she couldnt remember how to tie her shoes, shed write herself a note on how to get to the store 2 doors down to buy cigs (i think her mom would write them out) shed pin it to her shirt, or put it in her pocket, get 3 feet from her door, wont be able to find the note, and will end up in a fetal position on the sidewalk, lost till a cop finds her..literaly feet from her front door..

when i was young i had some scary times trying random unknown pills ..and combinations bad idea..

u learned that marijuana is all u need and is harmless has none of the drawbacks of desperation drugs, especialy if u treat it as a treat, not a lifestyle

people who medically need it should get all they need

but recreational should be occasional social, and not an all day everyday thing

i think marijuana can be fully legalized without issues to society, but hard drugs?


How terrible ...and esp. if you take it not knowing..but you would have to be a serious addict to not know what you are taking.


This is what blackmarket trade and legally-pressured desperation from opioid addicts created. Pre-20th century drug-prohibition, human kind was never on the path to creating and widely distributing desomorphine. Just like 20's alcohol prohibition pressured a huge increase in homicide, gang violence, and other negativity.. BUT most similarly, blindness and death from the improper manufacture of smuggled and illegally traded alcohol. When made clandestinely by gangs in the black market, safety takes a backseat to profit.. because they can't be sued for negligence.

I've seen too many people die from blackmarket causes.. Its so commonly said that heroin is used to escape reality.. But more often than they'd imagine, they were happy and stable when they tried it. Then before they could make their own decision about it's role in their life, stuff like this happens.. and they've lost an arm, leg, or the ability to live a healthy life. That's the reality they're trying to escape, the one that the gruesome blackmarket served them... Due to drug-prohibition taking a non-toxic, albeit addictive, drug out of hands of trained chemists and into the hands of criminals.